Loyalty game mechanics can be a massive revenue driver for both airlines, and their frequent flyer programs.

Getting to the advanced state of leveraging from loyalty game mechanics requires data collection, loyalty tracking, and booking integration.

Do your frequent flyers go out of their way to spend more with the airline?

How is incremental spend by top-tier frequent flyers attributed to the loyalty program?

For frequent flyer program owners – exhibiting the value that the program delivers back to the airline can be a challenge.

You might recall that in a previous article, we discussed the importance of measuring the share of wallet spend by loyalty members.

What does that mean? Well, simply put – it’s the difference between what the frequent flyer paid for the ticket, versus the cheapest option in that cabin that could have been booked at the time of purchase.

In the loyalty business, knowing why members took particular actions and transacted in specific ways is the key to unlocking new value.

When members purchase an airline ticket that is more expensive than other options that are presented to them at the time of purchase, it’s essential to know why the member made this decision.

Does the member need extra baggage allowance?  Seat selection?  Is the member attracted to the numbers in the price?

When tracking the ongoing transactional behaviour on both an individual member level, and as an aggregate of the total frequent flyer member base; a well designed frequent flyer program should be producing $10+ in ticket sales for every $1 the member generates in non-air revenue.

Elite members spend more on airline tickets than they need to pay. How much more members are paying depends on the loyalty program dynamics.

The difference in what members pay between the lowest available fare and their ticket value is called Incremental Loyalty Attributable to Revenue, better known as ‘The Loyalty Effect’. 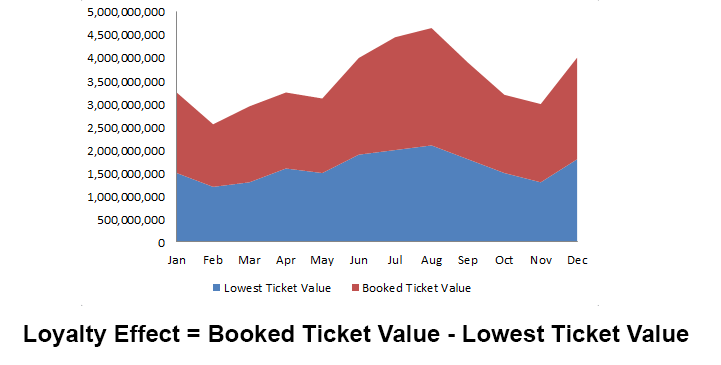 To calculate the incremental loyalty spend, we take the price paid by the member, minus the lowest available ticket at the time of purchase in the cabin they booked in.

To further identify and segment the frequent flyer member base, look at the historical data to identify members who paid above an amount which you determine is the line where you know the member has done calculations on mileage earning.

This is why it’s important for airlines and loyalty programs not to get hung up or segmenting members by the cabin in which they most often fly. Many segmentation or persona types should be applied at the same time.

Once the loyalty program has a segment of members who have a high likelihood of purchasing tickets because of attractive mileage earn rates, the booking flow for that segment can be adjusted to display more appropriate ancillary options.

In the Emirates example, we can see that the dollar per mile earn value changes depending on the fare family. There is no linear link between earn rates like in most loyalty programs. 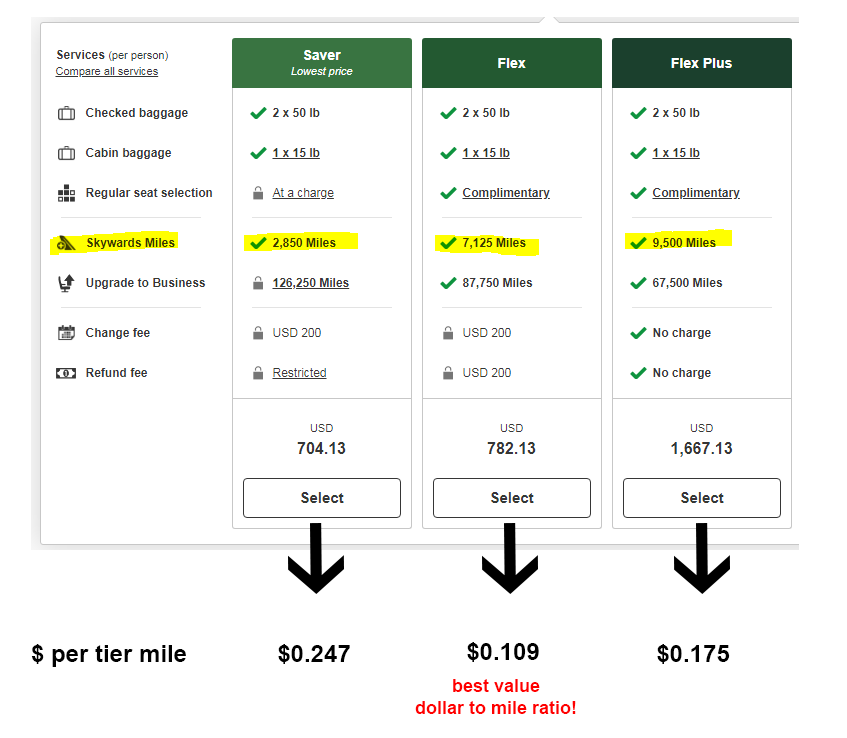 For an additional $78, the member will earn 2.25x the number of miles on a Flexi fare compared to the Saver fare. The member is basically buying miles and tier miles for 1.8c each. Additionally, the member is displaying correct loyalty behaviour, and will most likely fly more to ensure they attain or retain their elite status.

Emirates knows their frequent flyer purchase behaviour, and that translates into successful loyalty game mechanics that drive up the revenue per seat.

Air Asia fare families are vertical, and therefore the focus is on selling ancillary bundles, instead of the traditional horizontal example above with Emirates.

This makes things more complicated for loyalty revenue attribution, as there’s no clear cut way to know why the passenger is or isn’t purchasing the ancillary bundle. Even more mind-boggling is why no BIG Loyalty bonus is included in the bundle. Not having a loyalty inclusion instantly wipes out revenue from passengers who place high importance on airline points.

As such, Air Asia BIG Loyalty will have a difficult time proving the value of loyalty-attributable incremental ticket revenue under the current setup. 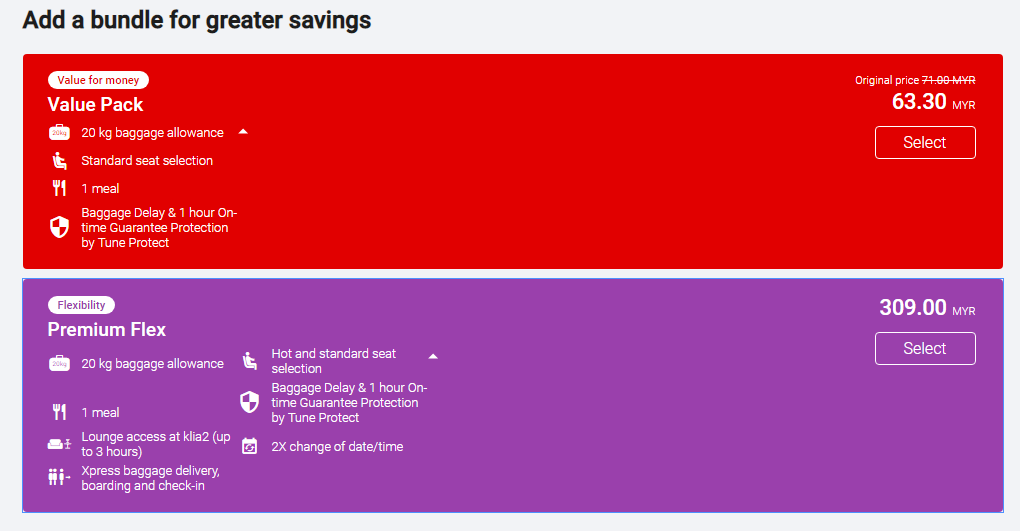 While this approach isn’t hindering the profitability of Air Asia Malaysia, it may have an underlying effect on loyalty program profitability as the ability to leverage from the airline brand to unlock new revenue opportunities is hindered by a lack of data intelligence on what is motivating passengers.

After all, that is what a loyalty program is designed to achieve, right? Incremental revenue above and beyond that the airline could not achieve without the loyalty program.

How can the airline drive revenue from tracking loyalty spend?

Frequent flyer programs can provide their piece of the puzzle right now. It’s vital to track when loyalty members are paying more for a ticket when they don’t need to, combined with how much each member is willing to pay (whether they realise it or not) per point/mile that contributes towards elite status.

Programs will then know that a portion of members would pay more for tickets than they currently spend. The spend-up potential from these members should be monitored to ensure that both the airline and loyalty program extract the maximum amount from each member.

The end result should be that loyalty members gladly pay more for an airline ticket than the lowest fare of the day.