According to a recent SEC filing, American Airlines AAdvantage generated $1B cash in Q2 2022, representing a 73% gross margin for the loyalty business.

American Airlines AAdvantage program has been valued at almost $30B, while at the time of the valuation, the entire airline group was valued by the market at less than $15B.

Gary Leff notes that “none of the financial analysts on this quarter’s earnings call asked a single question about the loyalty program.”

Why are none of the analysts asking questions about the single most valuable part of the airline?

Why is the President of AAdvantage not a C-level role, and why isn’t the loyal business represented on the board of directors?

Maybe… just maybe, it’s time for a shift in how airlines approach value creation and how their management teams speak to the market about their business.

Consider this – in the case of American Airlines, the majority of the company value is locked up in the loyalty program and yet not a peep about it on an earnings call??  What if – 90% of the call was speaking about AAdvantage metrics like credit card signups, cardholder usage and attrition, share of wallet among it’s most valuable flyers, how the new loyalty earn structure has impacted tickets sales etc… What if the airline team on analyst calls refused to allocate more than 10% of the time speaking about operational part of the company?

Consider this – how much time does Facebook, Apple or Twitter spend talking about engineers, code review policies and data centers? Almost zero!

How much time do Facebook, Apple, and Twitter spend talking about marketing, new users, new products and technology?

Like these big tech companies, airlines are marketing companies.

Airline loyalty programs have more in common with tech/marketing companies than they do with an operationally heavy airline business.

Perhaps it’s time that airline management recognises this and stop feeding analysts the same old blah blah blah about revenue per seat, cost of fuel and nonsense metrics that — by many of these airlines’ own financial filings — contribute little, if anything, to the overall value of the company versus that value that their loyalty program creates.

Now I’m not suggesting the operational/airline side of the business is not worth anything, and it’s important to consider the relationship between airline and loyalty company.

However, it’s important to note that the relationship between airline and loyalty co is not a 50/50 type deal.  For an established airline in a major airline alliance, in a country where credit card penetration is medium to high – the power dynamics between loyalty co and airline should always favour the loyalty co.

Let’s examine what a typical airline of this calibre would look like. 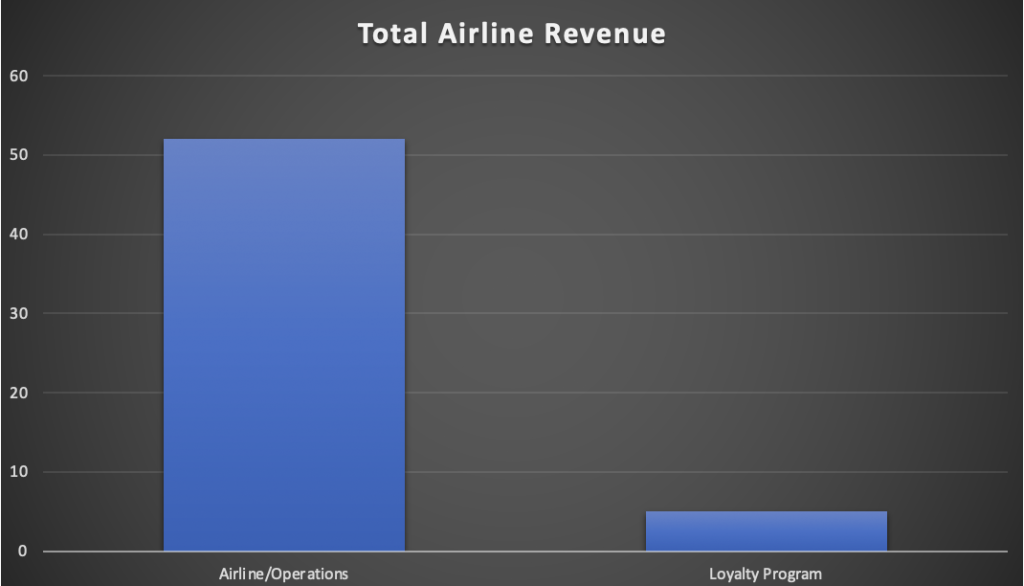 Airline/Operations: Most revenue would come from operational aspects like selling tickets to passengers, baggage fees, insurance products and so on.

Loyalty: Most revenue is from selling miles to third parties like banks and other airlines.

Now let’s explore typical margins once we factor in the cost of generating that revenue. 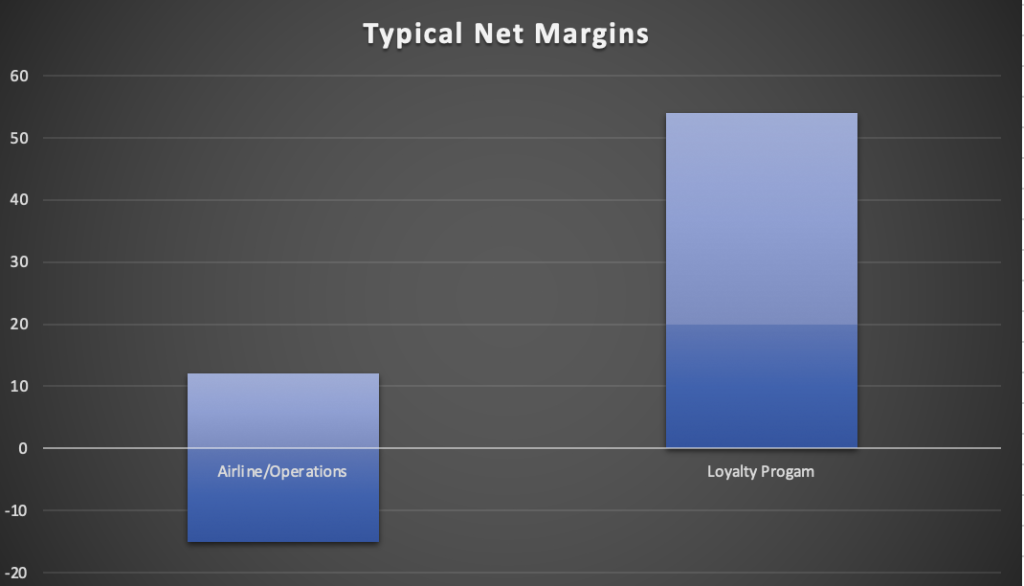 Airline/Operations: If at all profitable (many airlines are not operationally profitable), margins, at best, are between 1% and 20% depending on the operational efficiencies, markets, demand, and a whole lot of other variable metrics.

Loyalty: Stable revenue with high net margins ranging from 20 – 50% globally for a well-run loyalty business. These margins were largely unaffected, even during Covid which is considered the worst airline economic crisis in history.

The world’s most premium airlines, in the best of times, in the very best case scenario, traded between 4-10x profit-to-earnings ratio. Singapore Airlines or Cathay Pacific were up around 8-10x on a good day, and that’s after investing billions upon billions into the brand, service delivery, products and aircraft. On the other hand, the loyalty co valuations are more like a technology or fintech company, somewhere around 15-40x.

What this means is that even on a bad day, the airline loyalty co is still worth double what an operationally brilliant airline could achieve after investing billions.

Most airlines focus on what analysts, the market, shareholders or what they’ve been trained to focus on over their career.  Think about it – you don’t get to a C-level role at an airline without decades of experience inside the airline business. There is a professional incentive to keep the ‘we are an airline’ mantra going because that’s what got you into it and will keep you at the top.

Focus on operations and safety getting things right is important – it’s absolutely critical. 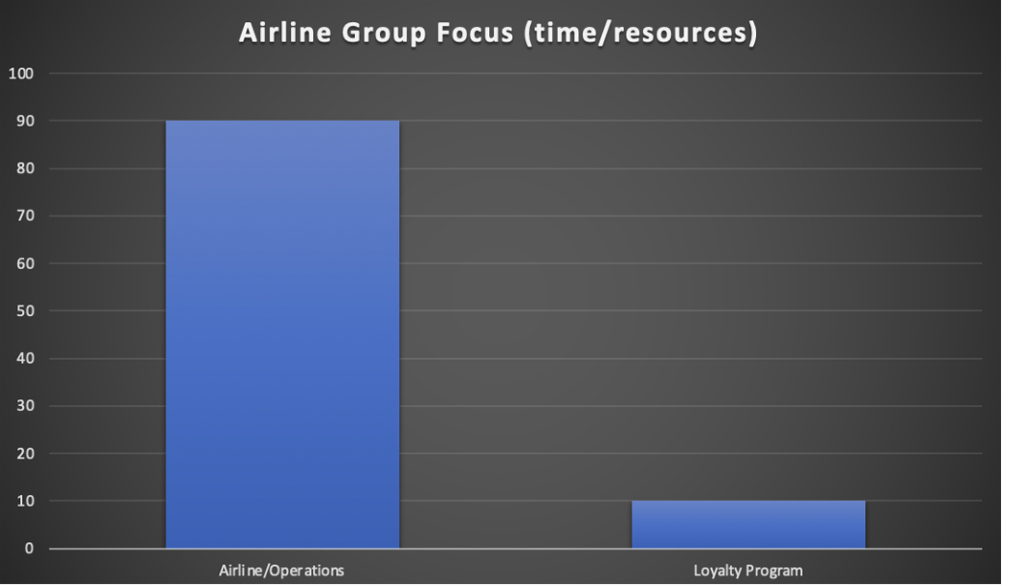 But it’s not worth 90%… not even 80% or 70& or even 50% of employees.  By that, I mean – in any given commercially focused team, the amount of attention (and therefore decision making) is overly weighted to ‘traditional airline metrics’ like revenue management, new products, and generally non-loyalty stuff.

What this translates into is that more decisions, more hiring and more focus centres around operational aspects.

Loyalty is simply that thing on the side that we have to do… darn loyalty… we would shut that silly department down if they weren’t saving everyone else’s jobs! Wait … what!!

The future of loyalty

What I’m suggesting is that if airlines want to maximize their market value, attract new investors, new partners, new value creation for employees, for flyers, for everyone — a radical shift in how airlines think about their business must transpire. 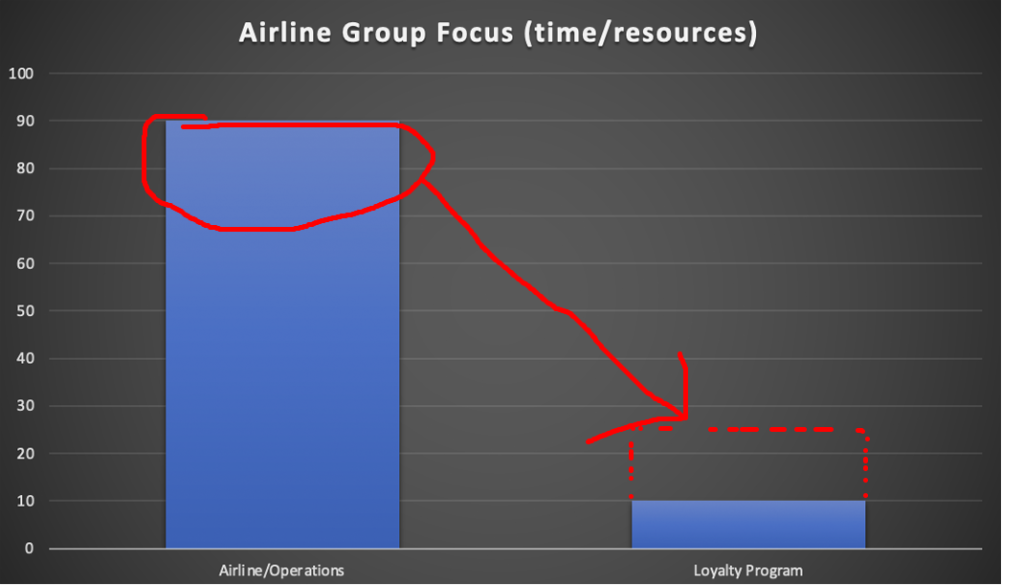 This starts with the CEO, President and management team talking about the airline as a brand, and speaking to the metrics which underpin the value of the company — instead of (important, but irrelevant) things like the cost of fuel which have far less of an impact on the market cap of an airline, than if the airline group were to say, add X new co-brand cardholders in a qtr.

Another simple and immediate action airlines could take is to split out revenue by high and low margins.  All ancillary and high-margin revenue should be parked under the loyalty Co.  This would have a significant impact on the airline culture as:

Relationship between airline and Loyalty Co

The airline needs the Loyalty Co to unlock market value, to fill seats, for marketing and branding support, and to act as the glue between customer and product. Aspirational productions, combined with access to those products, is critical.

The Loyalty Co needs the airline for access to aircraft (in a perfect world, inventory, RM etc would report into Loyalty Co).

Both of these departments of the airline need each other, but they don’t need each other equally. In most cases, the airline/operational side needs the Loyalty co more, because the value of the entire group is weighted more on Loyalty Co than on the airline.

The airline must continue flying, expanding it’s network, and maintain a minimum standard of product to keep the value of the Loyalty Co high.

While I recognise there are other nuisances in the relationship between Loyalty co and airlines that can’t be covered in an article, the takeaway is simple: The traditional airline business model of selling seats to profit is long dead for airlines without unlimited state funds to make it happen.  Even after those billions invested over decades, the best an airline could ever hope to achieve as the worlds top airline – is a 8-10x multiple. This is the best-case scenario!

Under a ‘Loyalty First’ model, where the Loyalty Co takes the reigns on all non-operations aspects of an airline, and management at the airline begin talking about the metrics that underpin the value of the company, the Loyalty Co can achieve much greater valuations than the airline could ever, ever, ever, possibly hope to achieve.

Mark Ross-Smith
According to a recent SEC filing, American Airlines AAdvantage generated $1B cash in Q2 2022, representing a 73% gross margin for the loyalty business. American...