Some of the brightest people in the travel sector have hung up their boots and are beginning new careers in other industries – and good for them. It can take real courage to shift industries. [side note: A great story on Qantas pilots becoming bus drivers here]

These same travel companies are lining up for Government handouts.

…frankly, too many airlines to list in this article. But you get the idea!

THE LOYALTY PROGRAM, aka ‘Customer Commercialization’

Why the heck are airlines and hotels letting go of senior loyalty staff – when loyalty programs, are (or should be) in most cases – a primary profit center?

Why does it seem like, for most loyalty programs, it’s a case of – sitting back, playing dead and waiting for a hit of Government money or for airline demand to magically switch on overnight?

This year, more than ever before in history – airline loyalty programs have been thrust into the spotlight due to the type of revenue they’re generating.

A quick refresher: Loyalty Programs can be worth more than the entire airline group. 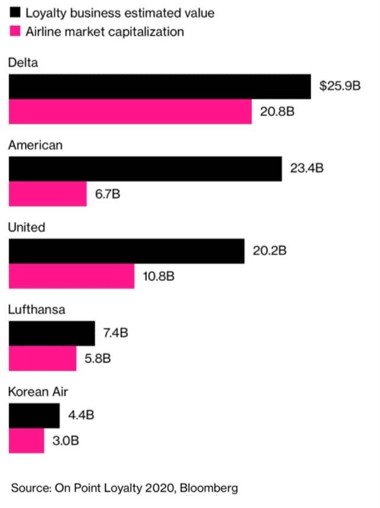 In previous articles, I’ve talked about how loyalty is a C-level role, how American Airlines is only profitable because of its loyalty program, how airline programs make billions, how to generate revenue from data, how to … does anyone even read my articles? WAKE UP, PEOPLE!!!!!!!

I italicised the words type of revenue, because while these programs are valued on their future cash earnings – this revenue is sustainable, high margin & more resilient to market conditions, unlike airline ticket sales, which are not. This is why airlines are valued by the market differently, than other types of companies. Stifel analyst Joe DeNardi has long stated that airline stocks were undervalued because the loyalty marketing revenue component wasn’t accurately valued.

Let’s spell it out in English.

$1 of profit in an airline is worth around 5.8x profits to earnings.

The Loyalty Co is valued at 5x higher rate based on profits than an airline could ever dream about. The more profit from sustainable types of revenue in Loyalty Co, the better it can leverage that valuation — to help the airline.

The days of Loyalty programs being boxed in by the airline as a ‘perks & benefits’ division of the airline — are long gone folks.

While traditional thinking by industry folks is that Loyalty revenue is made up predominately of co-brand cashflow from banks – it’s the type of revenue that’s important and not the product it’s derived from.

There are pockets of other high-margin revenue that Loyalty programs can tap into, or productize themselves outside of the credit card business.

That all leads to the most obvious question — WHY ARE MOST AIRLINES, DOING ALMOST NOTHING TO INCREASE THE VALUE OF THE LOYALTY PROGRAM, WHEN IT’S CLEARLY THE MOST VALUABLE ASSET???

The Business of Loyalty

If I were CEO of an Airline Loyalty Program – here’s what I would do to bring in new cash and grow the enterprise value of the Co.

The goal of creating new products is that these will attract new members into the program that may have previously never considered it. It’s not about ‘new signups’, but rather ‘customer acquisition’. Remember, this is a technology monetization business. We need more customers and need them to engage in their own way with the airline Loyalty brand.

..and I’m just getting warmed up.

My point is — the Loyalty Co does not need bums on seats to create new, revenue-generating products. The Loyalty Co managers need to think more like a technology start-up, and less like an airline.

Kick the Loyalty team overboard, give them a lifeboat and a pile of cash and watch them come back in a few months with a rescue boat, food for the crew, and enough tools to repair the mothership.

What the Loyalty Co needs — is a leader that can turn an ‘airline’ thinking into ‘technology’ thinking. A bridge between the two worlds of tech and airline, to cherry-pick the best of both, and focus the benefits into a world-leading Loyalty Tech Co.

Last month I predicted an airline would be run a tech CEO in 2021. The first step towards this is leveraging the awesome minds in the tech business to turbo-charge the Loyalty Co value beyond what traditional airline thinking can achieve.

It’s time for airline management, and Loyalty teams to get off their knees, to stand up – and to show the world that ‘technology marketing companies’, can help save the airline industry.

When Loyalty programs up to their game – we’ll see all sorts of amazing new innovations and opportunities spring to life.

But until then – airlines continue to bleed.